From raising pumpkins to creating frights: 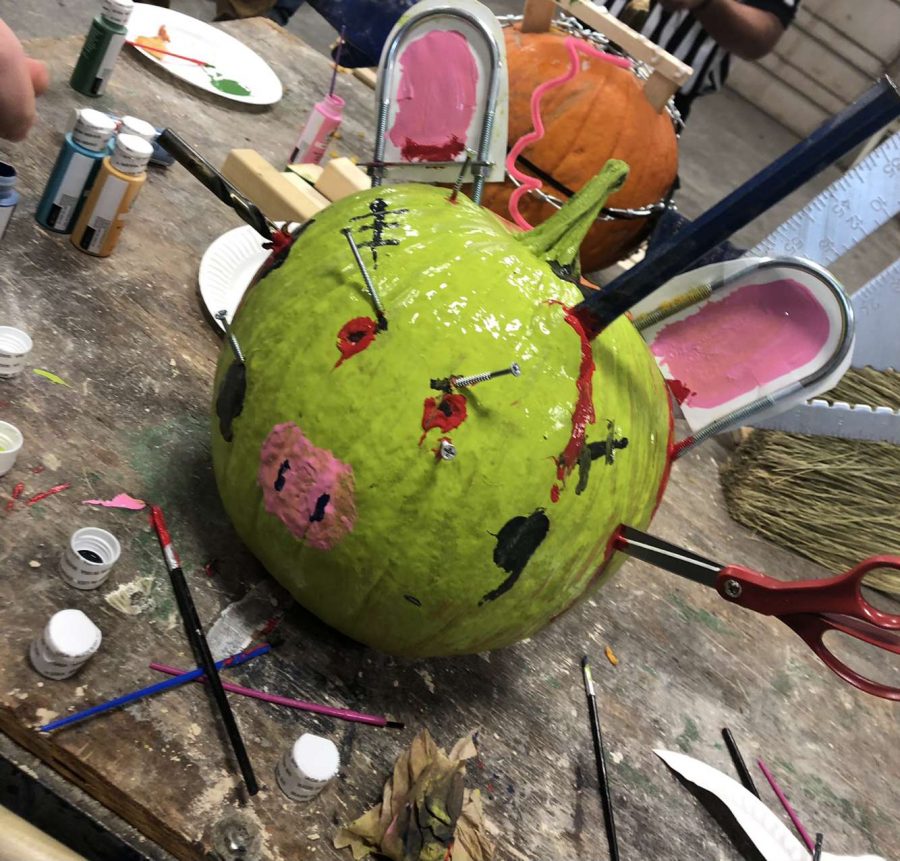 Franken-Pig. On Wednesday night Delta FFA members gathered together to create a monster pumpkin out of objects found throughout the Ag shop. This event took place after the chapter meeting. “Our initial plan was to paint a zombie cow and then it turned into a Frakenstein pig, which was very humorous but I loved our masterpiece,” said Arianna Nelson.

With the cold air, students rushed inside the building to be welcomed by FFA officers dressed in Halloween costumes. Usually the officers would be in their official dress, but this meeting is celebrating an early Halloween. Delta FFA members gathered in the Ag shop to paint pumpkins, compare Halloween costumes, and participate in the October chapter meeting.

While Kendall Butterfield, FFA advisor, provided the pumpkins, most of the night was planned by the officer team. “Some of it is tradition. We’ve always done a pumpkin activity during the October meeting, but a lot of it was officers’ ideas,” said Butterfield.

This year the officer team decided to have a monster pumpkin challenge using objects that could be found around the shop. The goal simply was to create a scary monster pumpkin using anything available.

“My favorite part was just seeing everybody’s creativity and having fun with the decoration of the pumpkins,” said Butterfield, “because we don’t have an outlet for that sometimes so that was just fun to watch everybody work together to create a monster out of their pumpkin.”

The treasurer of the FFA officer team, Grace Hall, thinks that the monster pumpkin idea was a great way to decorate pumpkins. “It was very entertaining to see how people’s creativity comes through the pumpkins, and how the different groups come up with monster themed pumpkins,” Hall said.

FFA member, Joslyn Carpenter, believes that it was a successful night, with her favorite part being that she was able to see many of her peers. “It’s kind of nice that our student body does show up to things, and support their beliefs and their peers,” Carpenter said. By showing up to the chapter meetings, she thinks it’s a great way to stay informed about what’s happening in the chapter.

“Being a senior in the chapter, I need to be able to show up to things and promote the FFA chapter,” said Carpenter.