Marching through the aftermath 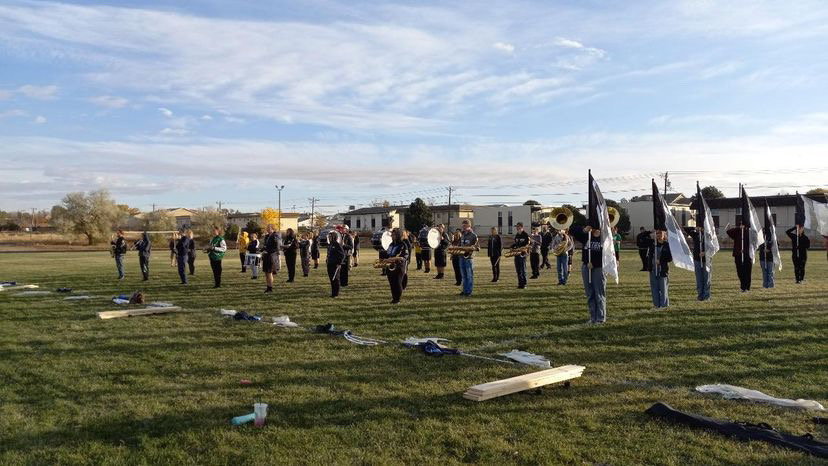 The Delta High School marching band finished off the season strong, finishing in fifth place at State with a score of 65 out of 100, one place away from making finals.

Trying to get a perfect score would take everything. The band would need to do every single thing right to get a perfect score. Their marching would have to be spot on, they would need to have all their visuals together and looking all the same. They would all need to play everything that they were given correctly. But they have to make sure that the judges enjoy the music.

The silence when they heard “And in 5th place with a score of 65.350 is the Delta High School Panther Pride Marching Band” was insane. “That was the quietest I’ve ever heard the band,” said Jamy Loy, a member of the marching band. They were proud of their last run but sad that they couldn’t give the seniors one more.

The marching band has put in hours of dedication to this one performance, staying late on cold nights to do a few more run-throughs to make sure everything was right, and being tired and just wanting to go home and sleep. But they didn’t, they stayed there and they got to work.

“It was really good, the marching was perfect, but the music could have sounded a lot better. But personally it was my best run,” said Hazel Lancaster, the section leader of the flutes.

The band members couldn’t have been happier about the way they performed. They did nothing wrong, the other bands just did a little bit better.

“I believe our run through of State was pretty awesome and I couldn’t be happier for everything the band has accomplished,” said Janine Garcia, the section leader of the front ensemble.

“It was definitely the best run of the season, and I think we are all very proud of a great year,” said Dan Weaver, the drum captain and section leader of drumline. Even though the seniors didn’t make it to finals, they were still very proud of everything they accomplished.