It’s a movie to Scream for! 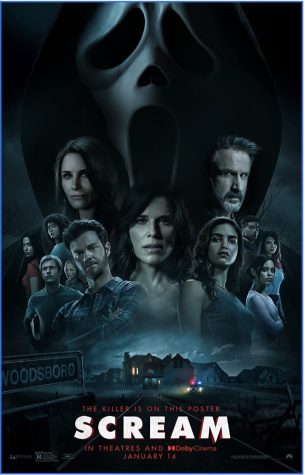 Scream has been referred to as a “re-quel”, meaning that it is a mix of “remake” and “sequel”. It follows the story of a typical high school group, the main character of the group Tara Carpenter. You have the jock Chad Meeks-Martin and the girl who’s only in the group because she is dating the jock Liv McKenzie. You got the popular girl Amber Freeman. Then you got Mindy Meeks-Martin, she’s the geek of the group that just happens to know everything about scary movies. Last but not least the guy who loves the main character Wes Hicks.
It starts off with the typical scream way, a teenage girl all alone at home as she gets a call from a random number. As we can tell from the trailer it seems that she doesn’t answer and goes back to texting her friend Amber. Tara then thinks Amber is messing with her as she gets a text saying “this isn’t Amber”. We can also tell that later on Tara picks up the phone, never a good idea. In this trailer we also see Tara having some trouble with her smart home locks. Didn’t know the killer was a hacker too.
We can tell that this isn’t just a remake from the original Scream by our one and only Neve Campbell talking on her phone “I’m Sidney Prescott, of course I have a gun.”. We can also tell that Dewey Riley and Gale Weathers are back as well.

I would definitely recommend it, it’s as tension-filled as you would hope and it’s bloody. To all the original fans out there I would say that it did have its flaws but it definitely didn’t ruin the film.